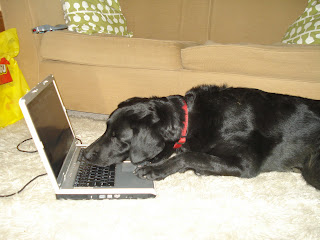 Nodding off looking up info about lightning...

C and I were having a quick stroll around the park before it started raining and then the thunder and lightning started. The thunder was very loud, but it didn't bother me, I was to busy concentrating on chasing my ball.

The next thing I know C has bent down to pick up my ball and there was a flash of light next to her foot and she said a rude word! She had been struck by lightning! She seemed ok so I was up for some more ball chasing, but she said it was home time, boo! So we hot footed it home.

I don't think we will be going for any walks when there is a risk of thunder and lightning for a while...
Posted by Ollie at 21:03 No comments:

Is that a hog roast I smell cooking? 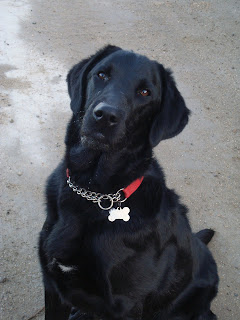 I was in the park with my friend Dan the labrador when the aroma of pork hit my nostrils. I thought it only right that I go and investigate.....so I ran full pelt about 200 yards to a marquee. I headed straight inside and it was great, so many people to say hello to, plus a quick dance. Then I heard voices....C and T had followed me so I snuck out the back of the tent and around the side.....and there in front of me was a sight so wonderful I can hardly describe it - a hot, steaming hog roast! Unfortunately, C and her friend S were between me and the hog. My number was up!

In hindsight, if I hadn't gone in for a dance I could have had me some hog, but alas no, kibble again for dinner for me!
Posted by Ollie at 20:49 No comments: 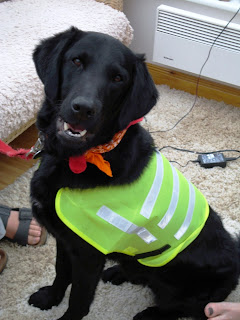 To celebrate L's parent's 40th wedding anniversary we had a 70's party at L's aunt and uncle's LC & SS. It was lots of fun, though I didn't recognise many people there because they were all had 70's hairstyles and funky glasses.

I went as the construction worker from the Village People, but I drew the line at wearing a moustache and hard hat!

I really like LC and SS as they give me loads of tasty food. I must have eaten my body weight in sausages, paw-fect!

The others had 70's food such as prawn cocktail, cheese and pineapple on sticks (bizarre!) and were drinking something called Blue Nun.

After dinner the karaoke machine came out and to be honest it was all a bit ropey. I laid down and wished for it all to be over....
Posted by Ollie at 08:39 No comments: