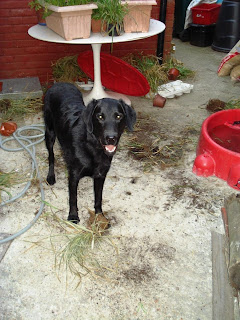 L & C have been spending loads of time sprucing up the garden for their anniversary BBQ/party. Old turf has been dug up, concrete has been smashed up, a new patio and new turf has been laid, the ivy has been trimmed and the garden furniture has been repainted. Phew! I have been exhausted watching it all.

Anyway, I thought it was time I did my bit, so while they were sitting on the soil removing tiny stones I made myself useful around the side by creating a 'display' of some plants.

Ok, so this did involve me picking up each plant with my mouth and then giving it a good shake (I had seen on the tv box thing that you have to loosen the soil around the roots, so this was what I was doing).

Finally, L & C came to see my handy work and they just stood there shaking their heads - I think they were too tired to shout at me, either that or they liked my handywork?! 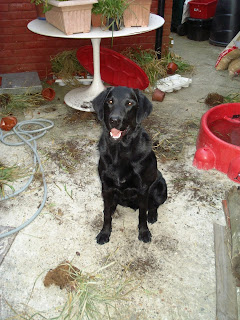