I must not chase the swans... 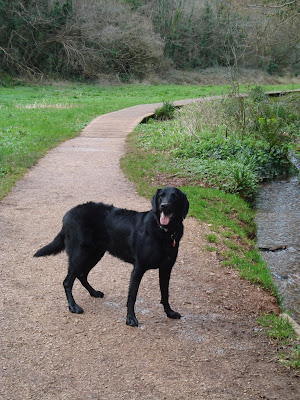 Last Sunday I thought I would get L & C up very early. They were grumbling a bit as it was raining, but they took me down to the lagoon which is one of my favourite places. We walked around it a couple of times and then I saw them....three swans sitting on the grass. I played it cool and wandered over and then at the last minute I made a dash for it and chased one of them. L & C were really annoyed with me, but it was only a game honest, I wouldn't have hurt it.

After we had all been back to bed for a morning snooze we went to a garden centre and I was caught short and had a little wee up some flower pots. Again L wasn't very happy with me. Luckily no one else saw.

It was still raining in the afternoon so we went to the Railway for a walk. I saw Marco's owner and her friend and ran over to see then as I could smell she had treats. I jumped up and grabbed the glove out of her hand and it didn't taste good so I dropped it on the floor and carried on pestering her for a treat which I got. I then spied the glove and thought it did look tasty after all and put one paw on it and then put the rest of it in my mouth and pulled. At this point L & C were running over and shouting at me. They rescued the glove (now with a new hole in it) and apologised to the lady who said it was fine...she said something about she has dogs and knows what they are like.... I was getting big scowls from L & C at this point so thought I had better behave myself for the rest of the walk....and the rest of the day.
Posted by Ollie at 10:11