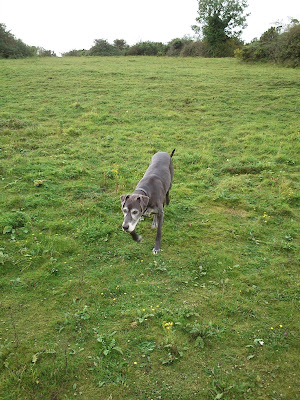 I heard a knock on the door and then when I was allowed into the living room I was delighted to meet L & C's friends R & L and then.....I spotted a dog...a big dog....a dog even bigger than me...it was their dog Erik! He is a great dane cross.

Erik looked quite bemused and had a wander around (with me dancing around him), then he explored my toy box. I thought this would be a good time to see if he wanted to give me a 'piggy back' so I hopped on, but I don't think it was for him. He then lay down calmly on the floor.

I thought I know what will get him up and playing, it's called the pool table dash and it goes like this....you run around and around the pool table as many times as you can (here is where my excellent corning and avoidance skills were honed) until you can't do it anymore. I must have done it about 20 times. All the humans looked a bit bemused, but if this didn't get Erik up playing nothing would....sadly it didn't work...this time.

Though as soon as L said 'walkies' Erik shot up and out we all went for a walk on the South Downs. To be honest I had worn myself out dashing so I just trotted along, sniffing the odd rabbit hole.

Then we headed to the pub and apart from a few barks at a labrador I was pretty good. Though not well enough behaved to be allowed inside the pub when it got chilly outside. I honestly would not try and help myself to someone's roast dinner, promise! 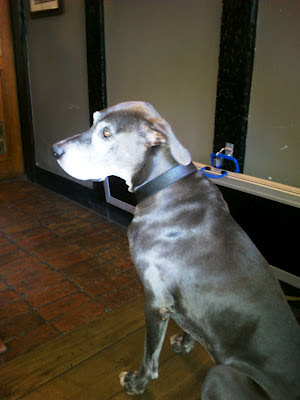 It was then time for Erik to head back to London. I really do hope I get to see him soon. I'll definately teach him the dash next time.