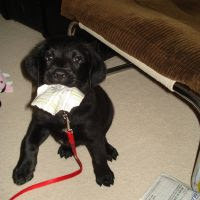 The birds were having a lovely sing-song this morning, so I seized the day and got up at 5.35am! L came down to the kitchen looking a trifle bleary eyed (can't think why?), so I thought I would wake her up with some games of chase...

Firstly, the tv remote control somehow landed in my mouth! I had seen L on that Wii Fit board thingy so thought a bit of jogging after me for 10 minutes would be good for her.

Secondly, the Wii stand jumped into my mouth and another chase was on. I had so much fun and was really rather tired after all that running about.
It had obviously made L hungry so she made some toast, but she looked full up to me so I jumped up and grabbed myself a bit (even I have to admit I was like lighting). L used one of those bad words that I don't really understand. I decided to let her know how much I enjoyed it by sitting next to her and doing a satisfactory burp, pardon me! When C got home I heard L grumbling that I was a 'labrathief' and she was going to work for a rest...strange that?!
Time for a nap now.
Posted by Ollie at 10:34